Michael R. Caputo was the Assistant Secretary for Public Affairs at the U.S. Department of Health and Human Services (HHS). A 30-year communications counselor, he is a film maker, an author and a media commentator. Prior to joining HHS in April 2020, Mr. Caputo served as president of Caputo Public Relations for 17 years, where he counseled corporations, chief executive officers, governments, presidents, and non-profit organizations on crisis communications, media relations, digital marketing, video production, executive communications, and public affairs. He has led victim-side disaster recovery communication programs after every US hurricane since Katrina for the nation's leading litigators protecting survivors. He has also advised top inventors protecting their intellectual property, job creators advocating public policy, and political candidates running for office in America and around the world. He started his career as a public affairs specialist for the United States Army 25th Infantry Division and served as a deputy director of the US House of Representatives Radio and Television Correspondents Gallery. In September 2020 he delivered an unhinged, 26-minute Facebook Live in which he spouted conspiracy theories and said anti-Trump “hit squads” were “going to have to kill me” and then was diagnosed amid the subsequent firestorm with a spreading and actually potentially deadly head and neck cancer. Three days later, he announced he was taking medical leave — capping a five-month tenure that had been dogged by controversy during some of the earliest, scariest portions of the pandemic. After treatment, on February 26 2021, Caputo’s cancer scans came back clean. He now works for a St. Petersburg, Florida-based public adjuster firm in addition to a PR job for a forthcoming Spanish-language media outlet out of Miami. Born in Ft. Bragg, North Carolina and and raised in small towns in Ohio and upstate New York, Mr. Caputo earned a Bachelor of Arts degree in Journalism and Foreign Affairs from the State University of New York at Buffalo. 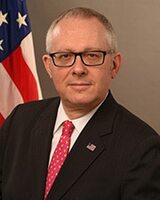