Raised in Weslaco, Texas, Powell is a native of the Rio Grande Valley. He earned a Bachelor's degree in Finance at The University of Texas at Austin while on a full athletic scholarship playing football under Coach Darrell K Royal. He later earned a Master's degree in Finance from U. T. Austin before returning to the Valley. In 1983, he moved to San Antonio, Texas, to become the President of The Quincy Lee Company, which at the time was the city’s largest commercial real estate development company. In 1987, Mr. Powell formed The Powell Companies real estate brokerage company and, with his partner, Laddie Denton, formed Bitterblue, Inc. Today Bitterblue, Inc. is one of San Antonio’s leading real estate developers having produced such notable projects as Lincoln Heights/The Quarry, The Longhorn Quarry, Alamo Crossing Shopping Center, Rogers Ranch, Shavano Park, Inwood, New Paesanos Restaurant at 1604, Lookout Canyon, Menger Springs in Boerne, Huntington, Willow Wood, Two Creeks, Kinder Ranch, and Saur Ranch. In 2004, Powell co-founded the medical software company AirStrip Technologies with his son, Cameron Powell, and Trey Moore. He served as the Chief Executive Officer and as its Chairman. AirStrip’s technology is used by hospitals nationwide to transmit wave form data in real time from the hospital to physicians' cell phones anywhere in the world that offers a cellular connection. AirStrip's initial product was designed to be used by the hospitals' labor and delivery units and physicians delivering babies, and the product line has been expanded to include the transmission of critical patient data in cardiology, the ICU, ambulances and across all of a hospital’s monitored beds. He is also a member of the Board of WellAware Holdings, Inc. Mr. Powell is a member of the Real Estate Council, the Greater San Antonio Builders Association, the San Antonio Hispanic Chamber of Commerce, the Greater Chamber of Commerce of San Antonio, and is a National Council Member of the Aspen Music Festival and School. He is the founder of the Responsible Growth Alliance. He has served on the Executive Committees of the Hispanic Chamber of Commerce and Los Compadres de la Missiones as well as the Executive Board of the Witte Museum in San Antonio. In addition, he has chaired numerous successful fundraising events for various nonprofit organizations in San Antonio. Powell is married to the former Dana Dillard of Pearsall, Texas. They have two sons. Cameron Powell, a graduate of Brown University and The University of Texas Medical Branch at Galveston, lives in San Antonio. Hunter Powell is a graduate of The University of Pennsylvania and Westminster Seminary and has received a doctorate from Cambridge University, England. The Powells also have six grandsons and one granddaughter. It is also interesting to note that Mr. Powell's grandfather, Forrest Powell, graduated from the UTMB School of Pharmacy in 1914. 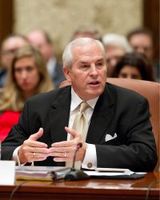