US Representative from Texas (2019-present)

US Representative for Texas' 29th district since 2019. Sylvia Garcia was previously in the Texas Senate 2013-2018) and started her public service career in the early 1980s, serving as presiding judge in the Houston Municipal System for an unprecedented 5 terms under two mayors. She was elected the to the Harris County Commissioner's Court in 2002 but lost this office in 2010, loosing reelection to Republican Jack Morman. Garcia holds a JD from Texas Southern University Thurgood Marshall School of Law. 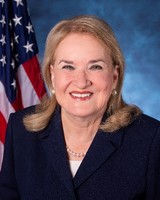