former US Representative from Florida, author of "High Crimes: The Impeachment of Donald Trump" 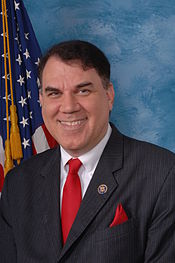