US Senator from Georgia (2021-present)

Jon Ossoff is an American politician serving as the senior United States senator from Georgia since 2021. A member of the Democratic Party, Ossoff was previously a documentary film producer and investigative journalist. Ossoff was the Democratic nominee in the 2017 special election for Georgia's 6th congressional district, which had long been considered a Republican stronghold. He lost the race to Karen Handel. In mid-2020, Ossoff won the Democratic Party nomination for the 2020 U.S. Senate election in Georgia to run against then-incumbent Republican senator David Perdue. Neither candidate reached the 50% threshold on the November 3 general election, triggering a runoff election on January 5, 2021, which Ossoff won. Ossoff serves alongside fellow Democrat Raphael Warnock, who defeated incumbent Republican Kelly Loeffler in the 2020 Senate special election runoff, also on January 5, 2021. The two races attracted significant national attention and spending, as they decided which party would control the Senate in the 117th Congress. With Warnock's and Ossoff's victories, Democrats and Republicans each hold 50 Senate seats, but Vice President Kamala Harris's tie-breaking vote gives Democrats an effective majority. With his victory, Ossoff became the youngest member of the Senate elected since Don Nickles in 1980 as well as the first Jewish member of the Senate from Georgia and the first Jewish senator from the Deep South since Benjamin F. Jonas of Louisiana, who was elected in 1879. 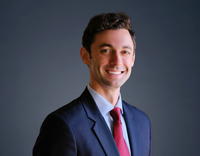