Kashkari was an investment banker at Goldman Sachs when he heard that its chief executive, Henry Paulson, was joining the George W. Bush administration as treasury secretary. Kashkari asked to come along. Soon, Kashkari, interim assistant secretary for financial stability, was the point person in Treasury for the key federal response to the crisis: the Troubled Asset Relief Program. Kashkari left the Obama administration in 2009. He spent six months in the California woods “detoxing” before joining Pimco, a giant investment firm. He didn’t stay long. In 2014, Kashkari made a long-shot bid as the Republican candidate for California governor, focused on the state’s unemployment. His bid garnered the support of high-profile Republicans but Kashkari was beat badly. Soon he was contacted by headhunters with an opportunity: to run the Federal Reserve Bank of Minneapolis. The job gives him a voice in steering the nation’s economy. 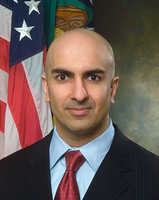