John H. McArthur, a member of the Harvard Business School community for more than six decades—as student (MBA 1959 and DBA 1963), as faculty member (beginning in 1962), as Dean (from 1980 to 1995), and as Dean and George F. Baker Professor of Administration, Emeritus—died on August 20, 2019 outside Boston, Massachusetts. His energy and leadership kept HBS at the forefront of business education and laid a foundation of intellectual growth and development on which the School continues to build today. His contributions extended far beyond HBS, enhancing the greater Boston region as well as organizations and institutions around the globe, including in his home country of Canada. John Hector McArthur was born in 1934 in Vancouver, British Columbia. His father was a grain inspector for the government and his mother was a nurse; McArthur was one of two sons. He grew up in a working-class environment in the suburb of Burnaby and attended Burnaby South High School, where he dated his classmate (and future wife) Natty Ewasiuk, played football, and worked part time in a local saw mill. After graduating from high school, McArthur enrolled at the University of British Columbia, earning a bachelor’s degree in forestry in 1957. He decided to channel his athletic drive into academics at HBS, earning an MBA in 1959. Although becoming a professor had never been part of his plan, McArthur was persuaded to stay on at the School, and in 1963, he completed his DBA. After retiring in 1995, McArthur continued to take on new challenges. For roughly the next decade, he spent a day or two a week helping HBS classmate James Wolfensohn, then president of the World Bank, with the major reorganization of one of the world’s most important financial institutions. McArthur was actively involved with several boards, including Koç Holdings, A.S., one of the largest companies in Turkey, and Koç University in Istanbul, and many in the healthcare field where he had a continued interest. In Canada, he chaired the Asia Pacific Foundation of Canada until 2015. He also helped a half-dozen start-ups get off the ground. McArthur, a resident of Weston, MA, leaves his wife of 63 years, Natty; daughter Susan Radovsky; daughter Jocelyn Swisher and her husband Dan Swisher; four grandchildren, Katarina and Isabella Radovsky, and Jack and Charlotte Swisher; and brother Kenneth McArthur. 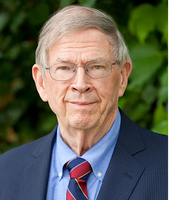