Director, Office of Management and Budget | 15th Secretary for Housing and Urban Development

Mr. Donovan was appointed Commissioner of the New York City Department of Housing Preservation and Development (HPD) in March 2004 by Mayor Michael R. Bloomberg. HPD’s $7.5 Billion New Housing Marketplace Plan to build and preserve 165,000 units of affordable housing for 500,000 New Yorkers is the largest housing plan in the nation. In September 2008, Mr. Donovan, together with Mayor Bloomberg, announced that the Plan reached the midway point on schedule with more than 82,500 units funded. Before joining the Bloomberg administration, Mr. Donovan worked at Prudential Mortgage Capital Company as managing director of its FHA lending and affordable housing investments. In the affordable housing arena, Prudential Mortgage Capital’s portfolio totaled more than $1.5 billion in debt, including Fannie Mae, FHA and other loan types. Prior to Prudential, Mr. Donovan was a visiting scholar at New York University, where he researched and wrote about the preservation of federally-assisted housing. He was also a consultant to the Millennial Housing Commission on strategies for increasing the production of multifamily housing. The Commission was created by the United States Congress to recommend ways to expand housing opportunities across the nation. Until March of 2001, he was Deputy Assistant Secretary for Multifamily Housing at HUD, the primary federal official responsible for privately-owned multifamily housing. At HUD, he ran housing subsidy programs that provided over $9 billion annually to 1.7 million families and oversaw a portfolio of 30,000 multifamily properties with over 2 million housing units. He also served as acting FHA Commissioner during the presidential transition. Prior to joining HUD, he worked at the Community Preservation Corporation (CPC) in New York City, a non-profit lender and developer of affordable housing. He also researched and wrote about housing policy at the Joint Center for Housing Studies at Harvard University and worked as an architect in New York and Italy. He holds Masters degrees in Public Administration and Architecture from Harvard University. 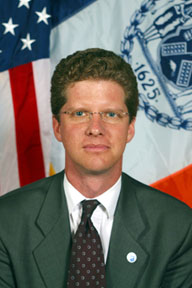