Jim Gibbons was born and raised in Sparks, Nevada, and attended Nevada public schools and universities. Gibbons earned a B.S. in Geology from the University of Nevada, Reno, and a Master's degree in Mining/Geology from the University of Nevada's Mackay School of Mines. He went on to earn his J.D. from Southwestern University School of Law and completed his post-graduate work at the University of Southern California. Gibbons served three terms in the Nevada State Legislature. He was first elected to represent Nevada's 2nd District in the House of Representatives in 1996. He was re-elected to a fifth term in November 2004. During his time in Congress, Gibbons served as chairman of several key committees and subcommittees regarding our nation’s intelligence capabilities, homeland security, military and our natural resources. He also was a founding member and Co-Chairman of the Congressional Mining Caucus and Co-Chairman of the House Gaming Caucus. Following the September 11, 2001, terrorist attack he authored and introduced bi-partisan legislation which would become the basis for the Homeland Security Act, which created the Department of Homeland Security. Gibbons is a former combat pilot and decorated veteran of both the Vietnam and Persian Gulf Wars. He served in the United States Air Force from 1967 to 1971 and graduated from the USAF Air Command and Staff College as well as the Air War College. He joined the Nevada Air Guard in 1975, attaining the rank of Colonel, and served as the group's Vice Commander from 1990 through 1996. He transferred from the Nevada Air Guard to the Air Force Reserves, where he served until 1998. Throughout his military service, Gibbons received 19 service medals, including the Legion of Merit, Distinguished Flying Cross, Air Medal with Two Oak Leaf Clusters, Aerial Achievement Medal and Air Force Commendation Medal with One Oak Leaf Cluster. He was also awarded the Distinguished Flying Cross for his extraordinary achievement while participating as an RF-4C Flight Leader in the Gulf War. A Representative from Nevada; born in Sparks, Washoe County, Nev., December 16, 1944; B.S., University of Nevada, Reno, Nev., 1967; M.S., University of Nevada, Reno, Nev., 1973; J.D. Southwestern Law School, Los Angeles, Calif., 1979; post-graduate studies, University of Southern California, Los Angeles, Calif.; United States Air Force, 1967-1971; Nevada Air National Guard, 1975-1996; lawyer, private practice; commercial airline pilot; hydrologist, Office of Federal Water Master; member of Nevada state assembly, 1989-1993; elected as a Republican to the One Hundred Fifth and to the four succeeding Congresses until his resignation on December 31, 2006 (January 3, 1997-December 31, 2006); was not a candidate for reelection to the United States House of Representatives in 2006; Governor of Nevada, 2007-present. 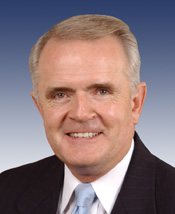