Former Chairman of Nasdaq and founder of Bernard L. Madoff Investment Securities, arrested in December 2008 for running a Ponzi scheme responsible for defrauding investors of over $50 billion.

Bernard L. Madoff, the one-time senior statesman of Wall Street who in 2008 became the human face of an era of financial misdeeds and missteps for running the largest and possibly most devastating Ponzi scheme in financial history, died on Wednesday April 14 2021 at the Federal Medical Center in Butner, N.C. He was 82. Mr. Madoff, who was serving a 150-year prison sentence, had asked for early release in February 2020, saying in a court filing that he had less than 18 months to live after entering the final stages of kidney disease. Madoff’s enormous fraud began among friends, relatives and country club acquaintances in Manhattan and Long Island — a population that shared his professed interest in Jewish philanthropy — but ultimately grew to encompass major charities like Hadassah, universities like Brandeis and Yeshiva, institutional investors, and wealthy families. The financial meltdown that began in the mortgage market in mid-2007 was his undoing. By December 2008, more than $12 billion had been withdrawn and little fresh cash was coming in to cover redemptions. Faced with ruin, Mr. Madoff confessed to his two sons that his supposedly profitable money-management operation was actually “one big lie.” They reported his confession to law enforcement and the next day, Dec. 11, 2008, he was arrested. The victims of his fraud numbered in the thousands and were scattered from Palm Beach, Fla., to the Persian Gulf. Paper losses totaled $64.8 billion, including the fictional profits credited to customer accounts over at least two decades. At least two people, in despair over their losses, committed suicide. A major Madoff investor suffered a fatal heart attack after months of contentious litigation. Some investors lost their homes. Others lost the trust and friendship of relatives and friends they had inadvertently steered into harm’s way. Madoff's older son, Mark, committed suicide in his Manhattan apartment early on Dec. 11, 2010, the second anniversary of his father’s arrest. n June 2012, Bernard Madoff’s brother, Peter, a lawyer, pleaded guilty to federal tax and securities fraud charges related to his role as the chief compliance officer at his older brother’s firm. He forfeited all his personal property to the government and sentenced to a 10-year prison term. Madoff’s younger son, Andrew, died of cancer at the age of 48. Professional reputations of more than a dozen prominent hedge funds and money managers were destroyed, including J. Ezra Merkin and the Fairfield Greenwich Group. Bernard Lawrence Madoff was born in Brooklyn on April 29, 1938. Before graduating from Hofstra University in 1960, he had already registered his own brokerage firm. By the early 1960s, he had started accepting money raised for him by his father-in-law, Saul Alpern, and two young accountants who worked in the Alpern firm. Pension plans and university endowments entrusted hundreds of millions of dollars to Mr. Madoff — despite a business operation that was cloaked in secrecy. He was sentenced to serve 150 years in prison on June 29, 2009. While some victims were able to recover all or part of the cash principal they invested with Mr. Madoff, victims who attended his sentencing in New York had insisted that he should pay for the devastation he inflicted on those who trusted him by spending the rest of his life behind bars. 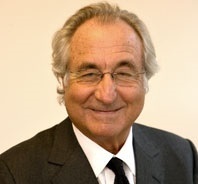