Defense Secretary under Reagan; former chairman of The Carlyle Group

Carlucci was born in Scranton, Pennsylvania, on 18 October 1930. After graduation from Princeton University in 1952, he served two years as a lieutenant in the U.S. Navy. In 1956 after study at the Harvard Graduate School of Business Administration and a short stint in private business, Carlucci joined the Department of State as a foreign service officer. In 1975 Carlucci returned to the State Department to serve as ambassador to Portugal until 1978, when he went to the Central Intelligence Agency as deputy director, staying until January 1981. Carlucci left the Pentagon in January 1983 to become president and later chairman and chief executive officer of Sears World Trade, Inc., in Washington. He stayed with Sears until 1986, when he moved to the White House as assistant to the president for national security affairs. In 1985-86, while still with Sears, he served on the President's Blue Ribbon Commission on Defense Management, chaired by David Packard. Carlucci worked particularly on the issues of long-range planning and the budgeting and programming process. Given his extensive experience in national security affairs, Carlucci was a natural choice to succeed Weinberger; he took office on 23 November 1987. After he left the Pentagon, Carlucci joined the Carlyle Group, a Washington investment partnership, as vice president and managing director; he later became chairman. He retired as its chairman in 2003. In 1954, he married Jean Anthony. They had two children, Karen Romano and Frank IV. The marriage ended in divorce, and in 1976 he married Marcia Myers. They had a daughter, Kristin Carlucci Weed. In addition to his wife, he is survived by his children; a sister, Joan Kleinrock; and six grandchildren. 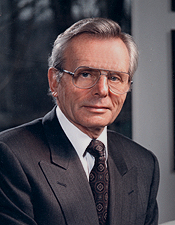