Jonathan Lines was raised in Yuma, Arizona where his family has been since the 1930's. The family originally settled in Pima, Safford and Thatcher, Arizona in the 1880s and were involved in ranching and mining. Jonathan is married to Rosalie from Provo, Utah. They have 11 children, 8 boys and 3 girls. Jonathan is the GM-VP for Lines and Lundgreen Roofing & Insulation and a partner in Tuscany Development, Yuma's premier medical and professional plaza developed over 21 acres. He has worked in the family business while attending AWC and NAU-Yuma since returning from a 2 year mission served in Argentina and Uruguay. Community involvement is important to Jonathon and he has been involved in many local organizations serving the community; 11 years on the National Advisory Board for Johns Manville, a Warren Buffet Company, is a member of the Boy Scout District Council for 14 years and currently serves on the Executive Board of the Arizona Grand Canyon Council. He has also served on the Yuma Rotary Board and the Caballeros de Yuma, a civic group fashioned after the model of the Phoenix Thunderbirds, serving for many years as chairman of the Balloon Festival, Major League Baseball, Midnight at the Oasis, the southwest premier Classic car show and was featured on the Speed Channels "My Classic Car". His love for the outdoors and belief in the Second Amendment make him a perfect fit as the Arizona Game and Fish Heritage Fund statewide Arizona representative. Jonathan currently is serving in his 3rd term as Chairman of the Greater Yuma Economic Development Council and 3rd term as Chairman of the Yuma County Republican Central Committee, representing the Yuma portion of Legislative Districts 4 and 13. 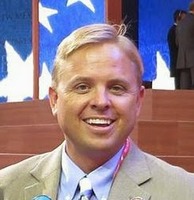