Represented the 26th Congressional District of New York. Chris was raised in Tonawanda, New York. Growing up, he saw firsthand how the Western New York values of hard work, honesty and accountability turned his family’s business from a small machine shop into a successful, international business with over 20 manufacturing companies spread throughout North America, Europe and Asia. The flagship company, Enidine Incorporated, was located in Orchard Park, New York. He joined Enidine in 1995, and held various positions throughout his tenure including Pacific Rim Sales Manager, Director of International Sales and Marketing and lastly, General Manager. Chris was promoted to President of the Automation Group, a division of International Motion Control in 2003. Prior to joining the family business, Chris spent seven years working in the IT industry. Since the sale of the company, Chris has played a significant role in the management of the Patrick P. Lee Foundation. This family foundation is dedicated to promoting awareness through education and research with a strong focus on community outreach. In his first term, Chris was appointed to the House Financial Services Committee. Chris has used his manufacturing background to introduce a plan that will strengthen manufacturing and small businesses in Western New York and create jobs here at home. As Vice-Chairman of the Congressional Dairy Farmers Caucus, Chris has stood up for Western New York dairy farmers who have faced hard times during our economic downturn. Also, he successfully fought to open a full-service federal passport office in Western New York to help our community cope with new border travel rules. Chris earned his Bachelor of Arts in Economics and Finance from the University of Rochester. He also earned a Master of Business Administration, with a concentration in International Business, from Chapman University in California; and Chris and his wife, Michele, are the proud parents of a young son. They reside in Amherst, New York. 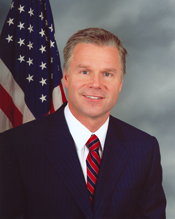