A Representative for South Carolina's 1st district, from 1995 to 2001 and from 2013 to 2019. He was Governor of South Carolina from 2003 to 2011. In November 2018, Sanford was defeated by Katie Arrington in the Republican primary (for "his" seat in the US Congress) He endorsed then Presidential candidate Donald Trump for the general election in 2016. He had previously endorsed Ted Cruz in the Republican primary. born in Fort Lauderdale, Broward County, Fla., May 28, 1960; attended high school in Beaufort, S.C.; B.A., Furman University, Greenville, S.C., 1983; M.B.A., University of Virginia, Charlottesville, Va., 1988; owner, real estate investment firm; farmer; elected as a Republican to the One Hundred Fourth and two succeeding Congresses, (January 3, 1995-January 3, 2001); was not a candidate for reelection to the One Hundred Seventh Congress; Governor of South Carolina, 2003-2011; elected as a Republican to the One Hundred Thirteenth Congress, by special election, to fill the vacancy caused by the resignation of United States Representative Tim Scott. 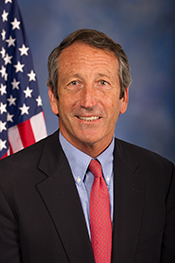