Scott Powell is the Chief Operating Officer of Wells Fargo. He also serves as a member of the Wells Fargo Operating Committee, which is the company’s senior business committee responsible for key strategic, business, and operational matters. Scott has more than three decades of experience working in retail banking, risk management, and consumer and auto lending. He was previously CEO of Santander Holdings USA, Inc. as well as CEO of Santander Consumer USA Holdings Inc., a publicly traded consumer finance company focused on vehicle finance. He also held a variety of roles at JPMorgan Chase & Co., including Head of Banking and Consumer Lending Operations, CEO of Consumer Banking and Retail Investments, President of Consumer Lending, as well as Chief Risk Officer, Consumer. Scott began his career with Citigroup, holding multiple risk management roles over 14 years. Scott holds a Bachelor of Arts from the University of Minnesota and a Master of Business Administration from the University of Maryland. He serves on the boards of directors of Phipps Houses and the END Fund in New York City and the Boys & Girls Club of Boston. 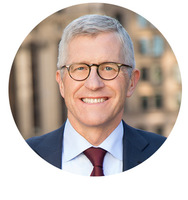