Thomas W. Horton is Executive Vice President of Finance and Planning and Chief Financial Officer of AMR Corporation, the parent company of American Airlines. He was named to the position in March 2006 upon returning to American, the world’s largest airline, from AT&T Corp., where he had been Vice Chairman and Chief Financial Officer. As CFO, Horton is responsible for all of American’s finance functions, including financial planning, treasury, corporate development, accounting investor relations, a business unit that provides investment service, and purchasing. In addition, he has overall responsibility for all planning functions. These include capacity planning, revenue management, corporate real estate, international planning, activities related to American’s membership in the global oneworld alliance, and fleet planning. Horton initially joined AMR in 1985 after working for the accounting firm, KPMG. He held a range of senior financial positions with AMR, including Vice President and Controller. From 1998 to 2000, he was vice president with general management responsibility for the airline’s Europe operations, based in London. In January 2000, Horton became Senior Vice President and Chief Financial Officer of AMR. During his time as CFO, he played a leadership role in American’s financial recovery effort in the immediate aftermath of September 11. In 2002, Horton left AMR for AT&T, where he served first as Chief Financial Officer and then as Vice Chairman and CFO. During his tenure, the company underwent a major financial transformation. In 2005, Horton led the evaluation of strategic alternatives and ultimately, the structuring of the AT&T merger with SBC, which formed the new AT&T. A native of Virginia and a long-time Texan, Horton holds an MBA degree from the Cox School of Business at Southern Methodist University and graduated with a BBA degree, magna cum laude, from Baylor University in 1983. He also earned a CPA. He serves on the Executive Board of the Cox School of Business at SMU. 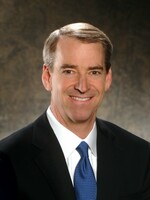