Mayor Pete Buttigieg is the chief executive of the City of South Bend. The city’s thirty-second mayor, he was sworn into office on January 1, 2012. As mayor, Buttigieg is responsible for the city workforce of over 1,000 employees and an annual budget over $300 million. A Rhodes Scholar, Buttigieg studied Philosophy, Politics, and Economics at Oxford and holds a bachelor’s degree in History and Literature from Harvard. Buttigieg was born in South Bend and grew up in the Northwest Side and North Shore Triangle neighborhoods. He attended St. Joseph’s High School in South Bend. Prior to becoming mayor, Buttigieg worked for McKinsey & Company, a top consulting firm, where he worked in economic development, energy, retail, and logistics. 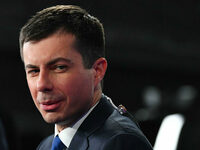 Updated about 24 hours ago