On June 19, 2014 the board of the American Conservative Union unanimously voted to elect Matt Schlapp as the ninth Chairman of the nation’s oldest and largest conservative grassroots organization. From 2001 to 2005, Schlapp served as President Bush’s political director during the re-election and previously as his deputy political director. During the 2000 presidential campaign he was a Regional Political Director with oversight of Missouri, Arkansas, Iowa, Wisconsin, Minnesota, Kansas, and Oklahoma. Schlapp left the White House to run the Washington, DC offices of Koch Industries, a company headquartered in his hometown and known for their philanthropy to free market causes. Schlapp’s Congressional experience began during the historic Republican wave of 1994 where he served Representative Todd Tiahrt (R-KS) as Chief of Staff for 5 years. During Schlapp’s tenure, Tiahrt averaged an ACU rating of 98%. Schlapp sits on several non-partisan and corporate boards including: The Hugo Wall School at Wichita State University, The University of Kansas Washington Intern Program, the 60Plus Foundation, Voter Gravity, and is an emeritus board member of the St. John Vianney Theological Seminary in Denver and the National Association of Manufacturers. He is also a member of the Order of the Knights of Malta. Schlapp’s political activism first took root at the University of Notre Dame, where he started a conservative student magazine. He is a graduate of the University of Notre Dame (B.A.) and Wichita State University (M.P.A.) Matt and his wife Mercedes have five young daughters and are founding partners of Cove Strategies, a legislative, communications and political consulting firm. The Schlapps are parishioners of St. Mary’s Catholic Church in Old Town Alexandria, Virginia. 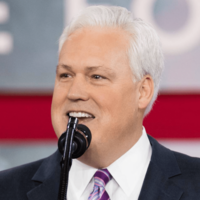