Mr. Smeallie was a Vice President for Government Relations for Environmental Issues Management, Inc. (EIM), a public affairs consulting company, prior to joining the firm. Responsible for strategic management of environmental concerns facing a number of Fortune 500 companies, he developed a highly respected expertise in environmental issues. Prior to EIM, Mr. Smeallie served as a Special Assistant to President Bush for Legislative Affairs from 1990 to 1993. As a Commissioned Officer of the President, he coordinated the efforts of policy makers on Capitol Hill and constituent organizations to develop and implement the Administration's legislative strategies. During these three years, he was responsible for the defense, trade, energy, environment, budget, and tax issues that came before Congress. He also served in the Bush/Cheney transition team, assisting with nominees during the confirmation process. From 1989 to 1990, Mr. Smeallie was Special Assistant to the Director for Legislative Affairs at the Office of Management and Budget in the Executive Office of the President. While at OMB, he worked closely with the Budget and Appropriation Committees of Congress. He was primarily responsible for representing the Administration before the Congress on the annual budgets of various agencies, including the budgets of the U.S. Department of Defense, the U.S. Department of Energy, and the U.S. Environmental Protection Agency. Before joining the Bush Administration, Mr. Smeallie was employed as the National Security Advisor to U.S. Senator Alfonse D'Amato of New York. While there, he was the Senator's representative on the Appropriations Subcommittees on Defense and Foreign Operations. Mr. Smeallie has an undergraduate degree from St. Lawrence University and a Masters Degree in National Security Studies from Georgetown University. 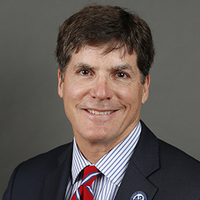