Kenneth J. (Ken) Kies is Managing Director of the Federal Policy Group, LLC. The Federal Policy Group provides sophisticated strategic and technical tax advice on tax policy matters before the Congress, the U.S. Treasury Department, the Internal Revenue Service, and the OECD. Mr. Kies has delivered significant legislative and regulatory results for his clients, which include major corporations, trade associations, and coalitions of companies with common objectives. Mr. Kies has led coalition efforts to enact legislation responding to the World Trade Organization’s ruling against U.S. foreign sales corporation benefits, to avert enactment of broad “corporate tax shelter” legislation that would have an adverse impact on legitimate business transactions, and to reverse Treasury regulations targeting “hybrid” arrangements of U.S. multinational corporations, among other projects. Prior to the acquisition of the Federal Policy Group by Clark Consulting in February 2002, Mr. Kies was Co-Managing Partner of the Washington National Tax Services office of PricewaterhouseCoopers LLP. Prior to joining PricewaterhouseCoopers, Mr. Kies served as the Chief of Staff of the Congressional Joint Committee on Taxation from January 1995 until January 1998. The Congressional Joint Committee on Taxation staff is responsible for developing and analyzing all tax legislation for the House Ways and Means Committee, the Senate Finance Committee, and other committees of the Congress. Mr. Kies oversaw development of major tax legislation, including the Taxpayer Relief Act of 1997, the Small Business Job Protection Action of 1996, and the Health Insurance Portability and Accountability Act of 1996. Prior to becoming Chief of Staff of the Joint Committee on Taxation, Mr. Kies was the firm wide Chair of the Tax Practice for BakerHostetler. 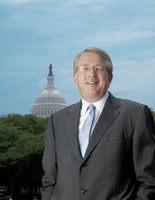