Gap cofounder returns to The Forbes 400 as the art market swells. With husband Donald owns large contemporary collection, featuring pieces by Chuck Close, Richard Serra and Alexander Calder, said to be worth more than $1 billion. Duo founded music-and-jeans store in San Francisco 1969; public 1976. Handed control of company—and nearly half their stock—to sons John, Robert and William in 2004; shares down 20% since. Company plans to close or downsize some of its 3,100 stores, open new ones; annual sales down 2.5% to $15.8 billion since 2004. Introduced universal Web site for its 4 brands: Gap, Old Navy, Banana Republic, Piperlime. Expanding to Russia. William ran company's international stores until 1998. Robert stepped down as interim chief executive last August; still on board. John owns majority stake in pro baseball's Oakland A's. Fisher was born Doris Feigenbaum in 1931 to a Jewish family. She went on to become one of the first women to graduate from Stanford with a degree in economics in 1953, the same year she married Don, a long-time family friend. Doris served as the company’s merchandiser for more than three decades and was responsible for the Gap’s signature style. When the two started The Gap, they only sold Levi’s brand jeans, another San Francisco company. Later on, the Fishers decided to create their own Gap-label jeans. The success of the Gap made the Fishers one of San Francisco’s wealthiest families. Despite the decline of retail and the Gap itself — its share of the American apparel market dropped to 4.4% in 2015, down from 5.4% ten years earlier — Doris and her three sons, Robert, William and John, still own 44% of the company, worth $4.7 billion. Bachelor of Arts / Science, Stanford University 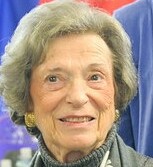