Drayton McLane, Jr. serves as chairman of the McLane Group and is the former CEO of the Houston Astros Baseball Club. A native Texan, and the grandson of a successful entrepreneur, Drayton experienced firsthand the hard work and dedication it takes to successfully thrive in industry. He began developing his tireless work ethic at age nine by working for his father at the family’s wholesale grocery business, the McLane Company. Mr. McLane received his Bachelor of Business Administration degree from Baylor University in 1958 and his Master of Business Administration degree from Michigan State University in 1959. Drayton came back to begin working at the family business loading trucks on the second shift. He worked his way up and by earning the respect and admiration of his co-workers, he became president and CEO of the company in 1964 and held these positions for thirty years. During his tenure, the McLane Company grew into a $19 billion dollar company, achieving an average growth rate of 30 percent per year. Following the McLane Company’s merger with Wal-Mart, Inc. in 1990, he became vice-chairman of Wal-Mart while maintaining his position at the McLane Company. He resigned in order to devote more time to the McLane Group, a parent company consisting of family owned companies operating throughout the world, which until November of 2011 included the Houston Astros where he served as Chairman and CEO. Drayton McLane completed his nineteenth season with the Astros in 2011 when he sold the team. McLane currently serves as chairman of Texas Central Partners. He also serves on several boards, including Baylor Scott & White Healthcare, the George H. W. Bush Presidential Library Foundation, Baylor College of Medicine, M.D. Anderson University Cancer Foundation and more. He and his wife, Elizabeth, reside in Temple, Texas. They have two sons and five grandsons. They are active members of First Baptist Church of Belton, where he is a deacon. Worked in warehouse of family grocery distribution center 1959; McLane Company grew into international holding company spanning 18 divisions, including food service, software and novelty gifts. Became chairman and chief exec; sold company to friend and tennis partner Sam Walton for 10.4 million shares in Wal-Mart stock and $50 million cash 1991. 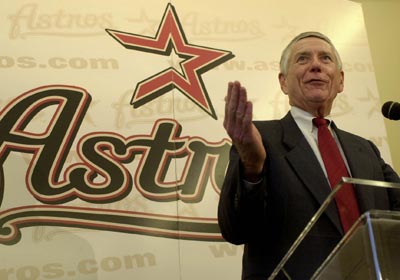