University of Michigan dropout amassed a fortune in shopping malls. Founded Taubman Centers 1950; today owns 23 malls in 10 states. Stock flat amid real estate crash. Son Robert joined in 1976, chief executive since 1990. Purchased venerable auction house Sotheby's 1983; took private. Public again 1988. Spent 9 months in jail on price-fixing charges 2004; wrote memoir Threshold Resistance about experience. Owns 4% stake in company; stock down 36% in past 12 months. Value of large contemporary art collection soaring in art market rally. He served as Sotheby's chairman of from 1983 to 2000 before he was tangled in a price-fixing scheme. He was convicted in 2001 of conspiring with Anthony Tennant, former chairman of Christie's International, to fix the commissions the auction giants charged. Prosecutors alleged sellers were bilked of as much as $400 million in commissions. Even with letters from more than 90 notable people, including former Secretary of State Henry Kissinger and former President Gerald Ford, Taubman was sentenced to a year and day in a low-security federal medical prison in Minnesota and fined $7.5 million. He was released two months early in May 2003 and spent a month in a Detroit halfway house. Taubman long insisted he was innocent and expressed regret for not testifying in his own defense. "I had lost a chunk of my life, my good name and around 27 pounds," he recalled in his book, saying he was forced to take the fall for others. After Taubman’s 2001 conviction, his son Robert became chairman of Taubman Centers. Another son, William, continued as executive vice president. In addition to his sons, Robert and William, he is survived by a daughter, Gayle Taubman Kalisman, who is co-chair of the A. Alfred Taubman Medical Research Institute's advisory board, two stepchildren, and his second wife, Judith Mazor Rounick, a former Miss Israel. 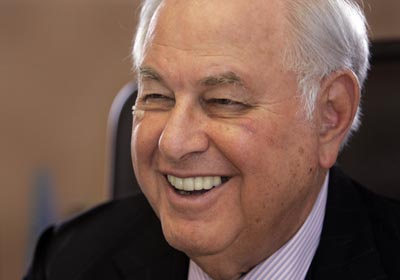