David Axelrod is Senior Advisor to President Barack H. Obama. Prior to that, he served as Senior Advisor to the Obama-Biden Presidential Transition and Senior Strategist to Barack Obama's campaign for the presidency. Since 1988, Axelrod has been Senior Partner at the consulting firm AKP&D Message and Media, based in Chicago. In that capacity, he managed media strategy and communications for more than 150 local, state, and national campaigns, with a focus on progressive candidates and causes. In 2006, Axelrod ran the independent expenditure media program for the Democratic Congressional Campaign Committee, helping Democrats regain the majority in the House of Representatives. That same year, Axelrod served as media adviser to Deval Patrick, who was elected Massachusetts's first Democratic governor in 16 years and the state's first-ever African American governor. In 2004, when President Obama was a member of the Illinois State Senate, Axelrod helped him defeat a primary field of six other Democrats and go on to a landslide win in his U.S. Senate campaign. Before entering politics in 1984, Axelrod spent eight years as a reporter for The Chicago Tribune, where he covered national, state, and local politics. In 1981, he became the youngest political writer and columnist in the paper's history. He also served as the Tribune's City Hall bureau chief. Active in charitable work in Chicago, Axelrod has supported Special Olympics and Misericordia. In 1998, he and his wife, Susan, helped found Citizens United for Research in Epilepsy (CURE), which has raised more than $9 million so far for scientists searching for a cure. Axelrod was born in New York City on February 22, 1955, and graduated from Stuyvesant High School and the University of Chicago. He served as an Adjunct Professor of Communication Studies at Northwestern University and has lectured on political media at Harvard University, the University of Chicago, and the University of Pennsylvania. He is married to Susan Landau and has three children, Lauren, Michael, and Ethan. 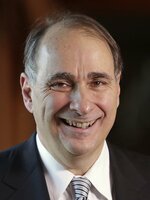