The Fox Companies Richard J. Fox was appointed to the Board of Trustees in 1967, is chair of the Alumni Relations and Development committee, and a member of the Executive, Investment and Student Affairs committees. Fox earned his Bachelor's in Engineering from Georgia Tech just after World War II, and was awarded an honorary Doctorate of Humane Letters from Temple in 1996. After serving active duty in the Korean War, Fox returned to Philadelphia and co-founded Fox Companies with his brother Bob. Fox Companies became one of the major real estate development and management corporations in the Greater Philadelphia region, constructing thousands of homes and apartments, shopping centers, and the Wells Fargo Center. Fox is chairman of Planalytics, Inc., a forecasting and consulting company he founded in 1990 that specializes in "business weather intelligence." The Richard J. Fox School of Business and Management was renamed in honor of Fox in 1999. Fox also endowed Temple's Myer and Rosaline Feinstein Center for American Jewish History, the Fox Center for Biomedical Physics, the Center for Frontier Sciences, and the Fox-Gittis Room of the Liacouras Center. Fox has also been active in national and state Republican politics. In 1980 he was the chairman of the Reagan/Bush campaign in Pennsylvania and in 1988 he was Jack Kemp's national finance chairman. Fox also co-founded the Republican Jewish Coalition, and is currently Chair of the Jewish Policy Center. In 2007 Fox backed "Freedom's Watch," a lobbying group that promoted the Iraq War "surge." https://en.wikipedia.org/wiki/Richard_J._Fox Fox has served on the Board of Trustees of Temple University continuously since 1967.[3][6] He served as its Chairman for 17 years from 1982 to 1999, when the Fox School of Business and Management was named in his honor.[1][2] He was the 1996 recipient of an honorary doctorate of humane letters.[3] 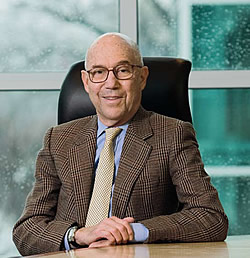