Former US Senator from Missouri, also served as US Attorney General

A Senator from Missouri; born in Chicago, Ill., on May 9, 1942; attended the public schools in Springfield, Missouri; graduated from Yale University 1964; received J.D. degree from University of Chicago School of Law 1967; admitted to the bar in Springfield 1967; taught business law at Southwest Missouri State University; state auditor of Missouri 1973-1975; attorney general of Missouri 1976-1985; Governor of Missouri 1985-1993; elected as a Republican to the United States Senate in 1994 and served from January 3, 1995 to January 3, 2001; unsuccessful candidate for reelection in 2000; attorney general of the United States, 2001-2005. One of the most high-profile and experienced Attorneys General in the nation’s history, Mr. Ashcroft led the U.S. law enforcement community through the challenging and transformational period following the tragic attacks of September 11, 2001. His tenure was highlighted by forceful public advocacy of President Bush’s strong anti-terrorism strategy. His quiet government influence was rated highest inside the Bush Administration by The National Journal. Raised in Springfield, Missouri, Mr. Ashcroft attended public schools until enrolling at Yale University, where he graduated with honors in 1964. He received his Juris Doctor from the University of Chicago in 1967. Prior to entering public service, Mr. Ashcroft taught business law at Southwest Missouri State University in Springfield. He authored a book honoring his father, Lessons from a Father to His Son, and co-authored multiple editions of two college law textbooks with his wife, Janet. His career of public service began in 1973 as Missouri Auditor. He was later elected to two terms as the state’s Attorney General. His colleagues in the non-partisan National Association of Attorneys General elected him as their President. As U.S. Attorney General, Mr. Ashcroft was the Chief Executive Officer of a Cabinet agency, larger than most Fortune 500 corporations, comprised of 112,000 employees with an annual operating budget of $22 billion. He ran the world’s largest international law firm, a national prison system and the world’s finest law enforcement agencies. Relying on his executive experience, he emphasized strategic management, integrating strategic planning, budgeting and performance measurement across the Department. For the first time in its history, the Justice Department earned a clean audit opinion, which it received each year of his tenure. Mr. Ashcroft substantially reorganized the Justice Department to focus on its number one priority: to prevent another terrorist attack. Leveraging every legal tool available to law enforcement, including the critical tools provided in the USA PATRIOT Act, the Justice Department initiated a tough antiterrorism campaign that has assisted in disrupting over 150 terrorist plots worldwide, dismantling terrorist cells in cities across America, and convicting 191 individuals in terrorism-related investigations. 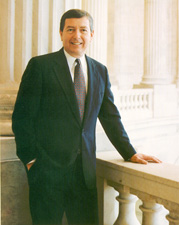