US Representative from Oklahoma

A Representative from Oklahoma; born in Tulsa, Tulsa County, Okla., September 28, 1954; graduated from Putnam City High School, Okla.; B.S., University of Tulsa, Tulsa, Okla., 1976; elected as a Republican to the One Hundred Fourth Congress; appointed to the One Hundred Third Congress by the Governor of Oklahoma under the provisions of Oklahoma Statute, Section 26-12-101 (B) and without objection by the House (H. Res. 585, 103rd Congress) to fill the vacancy caused by the resignation of United States Representative James Inhofe; reelected to the three succeeding Congresses and served until his resignation on February 15, 2002 (November 29, 1994-February 15, 2002); unsuccessful candidate for Governor of Oklahoma in 2002. Former Congressman and Wiley Rein & Fielding consultant, Steve Largent, has joined the Cellular Telecommunications and Internet Association as its President and CEO. Mr. Largent, who served four terms in the U.S. House of Representatives representing Oklahoma’s 1st Congressional District, was most recently a consultant to WRF’s Government Affairs practice on matters related to the legislative and executive branches. 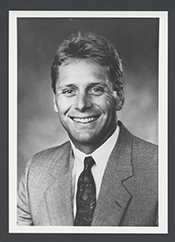