US Representative from Michigan (2015-present)

US Representative for Michigan's 14th district. She was elected in 2014. Before that... After a 30 years career in the US Postal Service, Brenda Lawrence got more involved in local affairs. In 1997 when she was elected on Southfield's City Council; In 2001 she defeated longtime incumbent Donald Fracassi for the Mayor's office, and was reelected for three additional terms, always winning handsomely or running unopposed. Lawrence was also elected the Oakland county Executive, but her 2010 Bid as lieutenant Governor of Michigan failed, 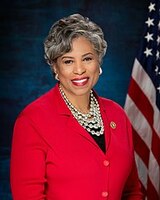