US Senator and former US Representative from Georgia. Senator Isakson indicated that he would retire on December 31st 2019, for health reasons. born in Atlanta, GA., December 28, 1944; graduated from the University of Georgia, Athens, GA 1966; served in the Georgia Air National Guard 1966-1972; member of the Georgia state general assembly, 1976-1990; unsuccessful candidate for election as Governor of Georgia 1990; member of the Georgia state senate 1993-1996; unsuccessful candidate for election to the United States Senate in 1996; chair of the Georgia board of education 1996; elected as a Republican to the One Hundred Sixth Congress by special election to fill the vacancy created when United States Representative Newt Gingrich did not take his seat in the One Hundred Sixth Congress; reelected to the two succeeding Congresses (February 23, 1999-January 3, 2005); was not a candidate for reelection to the House of Representatives, but was elected to the United States Senate in 2004; reelected twice, most recently in 2016. 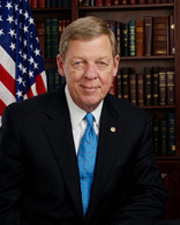