US Representative from Illinois

J. Dennis Hastert, 66 Mr. Hastert served as Speaker of the House of Representatives from January 1999 through January 2007. He served 11 terms in Congress and retired from the House of Representatives in November 2007. Prior to his role as Speaker, Mr. Hastert served as Chief Deputy Majority Whip in the 104. Congress and also served as Chairman of the House of Government Reform and Oversight Subcommittee on National Security, International Affairs and Criminal Justice. He also spent the first 16 years of his career teaching government, history and economics at Yorkville High School. A Representative from Illinois; born in Aurora, Kane County, Ill., January 2, 1942; B.A., Wheaton College, Wheaton, Ill., 1964; M.S., Northern Illinois University, DeKalb, Ill.,1967; teacher; athletic coach; business owner; member of the Illinois state house of representatives, 1980-1986; elected as a Republican to the One Hundredth and to the ten succeeding Congresses until his resignation on November 26, 2007 (January 3, 1987-November 26, 2007); Speaker of the House (One Hundred Sixth through One Hundred Ninth Congresses). 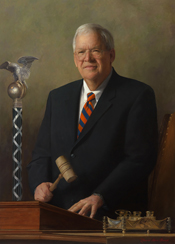