Timothy C. Collins has served as Senior Managing Director and CEO of Ripplewood Holdings LLC, which he founded in 1995. Mr. Collins serves as Chairman of the Investment and Strategy Committee of the Board of Directors of RHJ International, which acquired Kleinwort Benson in July 2010. Before founding Ripplewood, Collins worked for Onex Corporation, Lazard Frères & Company, Booz, Allen & Hamilton and Cummins Engine Company. Collins is a director of Citigroup, Inc. He is involved in several not-for-profit and public sector activities, including the Trilateral Commission, Yale Divinity School Advisory Board, Yale School of Organization and Management Board of Advisors, the Council on Foreign Relations and is a member of the Investment Advisory Committee to the New York State Common Retirement Fund and the Board of Overseers for Weill Cornell Medical College. Collins also serves on the board of the Tony Blair Foundation. He has a BA in Philosophy from DePauw University and a MBA in Public and Private Management from Yale University's School of Organization and Management. Collins received an honorary Doctorate of Humane Letters from DePauw University in 2004 and is an Adjunct Professor at New York University. 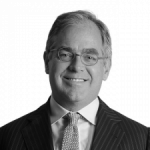