In 2019 Ángel Cabrera became the 12th president of the Georgia Institute of Technology, following a seven-year stint as president of George Mason University. From 2004 to 2012 Cabrera was president of the Thunderbird School of Global Management, which is now part of Arizona State University. As a business educator, he has played a key role in advancing professional ethics, internationalization, and corporate social responsibility and has been published in leading academic journals. Born in Madrid, Cabrera is the first native of Spain to serve as president of an American university. Education: Universidad Politécnica de Madrid, Georgia Tech (MS, PhD) Ángel Cabrera was named the sixth president of George Mason University in Northern Virginia near Washington, D.C., effective July 2012. Prior to accepting his appointment at Mason, Cabrera served as president of the Thunderbird School of Global Management in Arizona from 2004 to 2012, being designated President Emeritus in April 2012. During his tenure, Thunderbird established several new degree programs and research centers, streamlined its operations and finances and completed a $65M campaign. It also launched Thunderbird for Good (an initiative that has helped to train hundreds of women entrepreneurs in Afghanistan, Jordan and Peru), the Thunderbird Emerging Markets Lab and the Thunderbird Oath of Honor, a commitment to professional ethics taken by all graduating students. Before Thunderbird, Ángel served as Dean of IE Business School in Madrid, Spain. As an outspoken advocate for business-corporate-global citizenship, his ideas have been featured by media such as the Wall Street Journal, the Financial Times, the International Herald Tribune and CNN. In 2006, he was appointed Special Advisor to the United Nations Global Compact and Chairman of the international taskforce that authored the Principles of Responsible Management Education. In 2002, he was recognized by the World Economic Forum as a Global Leader for Tomorrow, in 2004 by Business Week as a "Star of Europe" and in 2005 by the World Economic Forum as a Young Global Leader. In 2010 he was appointed by Pres. Clinton as a topic leader for the Clinton Global Initiative Annual meeting. Ángel serves on the board of specialty retailer PetSmart and he chairs the Georgia Tech Advisory Board. He earned his PhD and MS from the Georgia Institute of Technology, which he attended as a Fulbright Scholar, and his BS and MS in computer and electrical engineering from Madrid Polytechnic University-Spain's premier engineering school. Ángel is a 2008 Henry Crown Fellows of The Aspen Institute and a member of the Aspen Global Leadership Network. 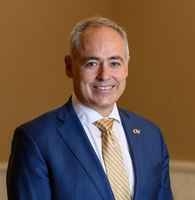