Mr. Grano is an Academy Securities’ Advisory Board Member and Chairman and CEO of Centurion Holdings LLC. He was previously the Chairman and CEO of UBS Financial Services Inc. (formerly UBS PaineWebber). Mr. Grano was instrumental in helping to bring about the merger of PaineWebber with UBS in 2000. Prior to joining PaineWebber he was with Merrill Lynch for 16 years, holding various senior management positions including Director of National Sales. In 1987, Mr. Grano was named the industry’s best retail marketing executive in a survey conducted by Investment Dealers’ Digest. He was the former Chairman of the Board of Governors of NASD and a member of the NASD’s Executive Committee. Mr. Grano was appointed by President George W. Bush in 2002 to serve as the Chairman of the Homeland Security Advisory Council and he served in this capacity until August 2005. Mr. Grano holds honorary Doctor of Laws degrees from Pepperdine University and Babson College as well as an honorary Doctor of Humane Letters degree from Queens College. In addition to being one of the financial service industry’s leading executives, he is involved in a wide range of educational and philanthropic endeavors. Mr. Grano also served in the U.S. Special Forces (Green Berets). He is the author of the book “You Can’t Predict A Hero” which was on BusinessWeek’s best seller list in 2009. 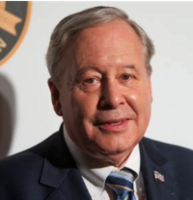