Ross Perot, Jr. has served as Chairman of the Board of Perot Systems since September 2004 and as a director since June 1988. Mr. Perot served as President and Chief Executive Officer of Perot Systems from September 2000 until September 2004. Mr. Perot is founder of Hillwood Development Company LLC. Mr. Perot is the son of Ross Perot. Ross Perot, Jr. serves as Chairman of The Perot Group, which manages the various Perot family interests that include real estate, oil and gas and financial investments. In addition, Mr. Perot is Chairman of Hillwood, which he founded in 1988. Hillwood is ranked among the top ten real estate developers in the United States and is recognized for its high-profile projects and public-private ventures. Hillwood Energy has natural gas and oil interests in the United States, Iraq and Russia. Mr. Perot is a Founder of Perot Systems Corporation and served on its Board of Directors beginning in 1988. He served as Chairman of the Board from 2004 until the company was acquired by Dell Inc. in 2009. During his tenure on the Board, Perot Systems grew to be a multi-billion dollar global technology company with more than 24,000 associates in North America, Europe and Asia. Mr. Perot currently serves on the Dell Inc. Board of Directors. A native of Dallas, Mr. Perot graduated from St. Mark’s School of Texas in 1977 and earned his bachelor’s degree in business administration from Vanderbilt University in 1981. In 1982, after graduating from Vanderbilt University, he completed the first helicopter flight around the world. The 26,000 mile trip was completed in less than 30 days, crossing 26 countries, and 17 seas and oceans. His helicopter, The Spirit of Texas, is on permanent display at the Smithsonian Institution’s Air and Space Museum in Washington, D.C. After joining the United States Air Force in 1983, Perot earned certification as an F-4 pilot and served for 8 ½ years. Perot then served as chairman of the Air Force Memorial Foundation where he led a 14-year effort to build the United States Air Force Memorial in Washington, DC, honoring the men and women of the United States Air Force. The Memorial was dedicated to the Nation in October, 2006. From 2002-03, Mr. Perot served as Chairman of the Governor’s Task Force for Economic Growth, which was charged with advising Texas Governor Rick Perry on ways to ensure long-term economic growth in Texas. He currently serves as Chairman of the Board of the East-West Institute, serves on the board of St. Mark’s School of Texas and the Dallas Committee on Foreign Relations. 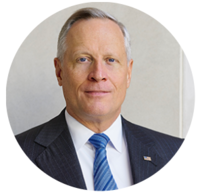