Richard C. Blum, a financier and major donor to Democrats — above all his wife, Senator Dianne Feinstein of California — died of cancer on Sunday March 27 2022 at the family home in San Francisco. He was 86. Mr. Blum became Ms. Feinstein’s companion between the death of her second husband, Bertram Feinstein, in 1978, and her victory in a race for mayor of San Francisco in 1979 after two unsuccessful attempts. They married in 1980. Richard Blum founded equity investment management firm Blum Capital in 1975 and is the Chairman and President. Active in numerous non-profit organizations, Blum is the Founder and Chairman of the American Himalayan Foundation and is honorary consul to Mongolia and Nepal. On April 25, 2009 Blum was honored with the Berkeley Medal by UC Berkeley Chancellor Robert Birgenau in front of His Holiness the 14th Dalai Lama. Blum received both a BS in business administration and MBA from University of California at Berkeley’s Haas School of Business. In addition to Ms. Feinstein, Mr. Blum is survived by a brother, Robert; his daughters, Annette, Heidi and Eileen; his stepdaughter, Katherine; and seven grandchildren. 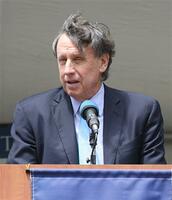