Peggy Rajski is an Academy Award-winning film producer and director and currently serves as the Dean of Loyola Marymount University’s (LMU) acclaimed School of Film and Television in Los Angeles. Rajski won the Academy Award for Best Live Action Short with her directorial debut, the short film TREVOR, a poignant comedy about a young teen whose world is turned upside down when word spreads at school that he might be gay. TREVOR’s success led to a special screening on HBO in 1998 hosted by Ellen DeGeneres, the same year Ellen publicly announced she was gay. Rajski recognized that the HBO airing could provide a unique opportunity to help address the high number of gay and questioning young people at risk for suicide, and asked producer Randy Stone and screenwriter James Lecesne to join her in creating The Trevor Project, the country’s first and only 24/7 crisis intervention and suicide prevention service for LGBTQ+ youth. She served as the organization’s inaugural Executive Director and has continued as a member of the Board of Directors in the decades since. Peggy’s many film credits include three of writer/director John Sayles’ early films: THE BROTHER FROM ANOTHER PLANET, MATEWAN, and EIGHT MEN OUT, as well as Stephen Frears’ film noir classic THE GRIFTERS, which she co-produced with Martin Scorsese. The film received four Academy Award nominations and won the Independent Spirit Award for Best Feature. After meeting Jodie Foster while serving on the Sundance Film Festival jury together, Rajski produced her directorial debut LITTLE MAN TATE as well as her second film, HOME FOR THE HOLIDAYS. Prior to her time at LMU, Peggy spent eight years at NYU’s Tisch School of the Arts Graduate Film Program as Head of Studies for producing. 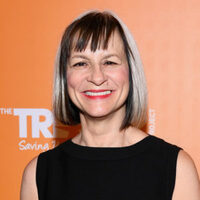