Devaney, inspector general of the Interior Department, helped expose Abramoff's dealings at the agency. The department's No. 2, Steven Griles, pleaded guilty to charges he lied during congressional testimony based in part on Devaney's investigation. The Recovery Act Transparency and Accountability Board will monitor the government's recovery spending. Obama plans to announce Devaney during a meeting with governors on Monday, the AP reports. In addition to the Abramoff investigation, Devaney led a separate investigation into workers at the Minerals Management Service, part of the Interior Department. His review found a "culture of substance abuse and promiscuity" at the Denver and Washington offices of the service. He has served as inspector general of the Interior Department since 1999. He was a senior official with the Secret Service, retiring in 1991. He worked as head of criminal enforcement at the Environmental Protection Agency before Interior. 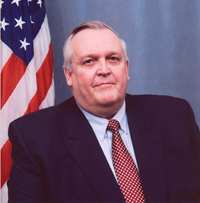 Updated over 13 years ago