founder of Oxbow Carbon; brother of David and Charles Koch

One of 4 sons of Fred Koch, who invented method of refining gasoline from heavy oil. Expanded oil industry in U.S.S.R. 1930s; returned home before World War II. Founded Koch Industries, passed to sons after death in 1967. Bill attended MIT. With brother Frederick, sold stake to brothers Charles and David (see both) for $1.3 billion 1983. Later sued for more, case settled 2001. Used inheritance to create energy conglomerate Oxbow; produces calcined petroleum coke, coal, steel, natural gas. Sales: $3.7 billion. Art and wine collector sued auction house last year for selling him counterfeit vintage; paid $500,000 for four bottles alleged to have belonged to Thomas Jefferson. Born in Wichita, Kansas, Koch is a graduate of Culver Military Academy. He received a bachelors of science, master’s and doctoral degree in chemical engineering from Massachusetts Institute of Technology. While at MIT, Koch was elected to engineering honor societies, Tau Beta Pi and Sigma Chi. He also was the recipient of the Roger de Friez Hunneman Prize, awarded to outstanding scholarship and research in chemical engineering. Koch's world class art collection has been the subject of numerous exhibitions and he has loaned many masterpieces to museums around the world. He is a strong supporter of the magnet arts programs in the public schools and is the founder of Oxbridge Academy, an innovative private high school located in West Palm Beach. He has served on the boards of the Museum of Fine Arts, University Hospital, the Smithsonian Museum for American Art, the President’s Circle for the National Academy of Arts, Science and Medicine, and chaired the Crime Commission for the State of Kansas. Together with his wife Bridget Rooney-Koch, he and his six children reside in Palm Beach, Florida. 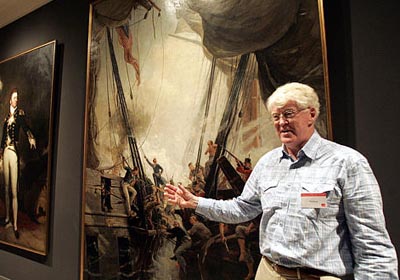