US Representative and Senator from Maryland

Former Senator Paul S. Sarbanes of Maryland, a publicity-shy lawmaker who wrote legislation to curb fraudulent accounting practices that led to huge investor losses and major corporate bankruptcies in 2001 and 2002 and counseled Democratic Party leaders on a variety of issues, died on Sunday. He was 87. Judy Keenan, a longtime aide, said she did not know the exact cause of death, but that he had heart problems. (father of John Sarbanes), a Representative and a Senator from Maryland; born in Salisbury, Wicomico County, Md., February 3, 1933; attended the public schools of Salisbury; graduated, Princeton University 1954; attended Balliol College, Oxford, England, as a Rhodes Scholar 1954-1957; graduated, Harvard Law School 1960; admitted to the Maryland bar in 1960 and commenced practice in Baltimore; law clerk, United States Court of Appeals, Fourth Judicial Circuit 1960-1961; legislative draftsman, Maryland Department of Legislative Reference, Maryland General Assembly 1961; administrative assistant to chairman, Presidents Council of Economic Advisers 1962-1963; executive director, Charter Revision Commission of Baltimore City 1963-1964; member, Maryland house of delegates 1967-1971; elected as a Democrat to the Ninety-second Congress in 1970; reelected to the Ninety-third and Ninety-fourth Congresses (January 3, 1971-January 3, 1977); was not a candidate for reelection to the House of Representatives, but was elected in 1976 to the United States Senate and reelected in 1982, 1988, 1994 and 2000 for the term ending January 3, 2007; chair, Joint Economic Committee (One Hundredth through One Hundred Second Congresses), Committee on Banking, Housing, and Urban Affairs (One Hundred Seventh Congress [January 3-20, 2001; June 6, 2001-January 3, 2003]); not a candidate for reelection in 2006. Paul Spyros Sarbanes was born in February 1933, in Salisbury, on Maryland’s Eastern Shore. He was the son of two Greek immigrants, Spyros P. Sarbanes and Matina Tsigounis Sarbanes, who ran the Mayflower restaurant in Salisbury. He is survived by a brother, Anthony Sarbanes; a sister, Zoe Pappas; two sons, Representative John P. Sarbanes, who holds his father’s old seat in the House, and Michael Sarbanes; a daughter, Janet Sarbanes; and several grandchildren. His wife, Christine, died in 2009 after 48 years of marriage. 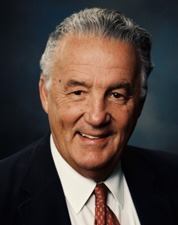