Former Director of the Defense Intelligence Agency (DIA) July 2012 - August 2014 Served as National Security Advisor November 17, 2016 - February 13, 2017. He resigned because of claims made against him that he misled President Mike Pence about having communications with the Russian Ambassador to the United States, Sergey Kislyak. In April 2017, he was investigated for accepting money from foreign governments without required approval. 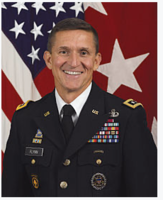