Friends of The Israel Defense Forces

Initiates and helps support educational, social, cultural, and recreational programs & facilities for the young men and women soldiers of Israel who defend the Jewish homeland.

Established in 1981 by a group of Holocaust survivors to provide for the wellbeing of the men and women who serve in the Israel Defense Forces (IDF) as well as the families of fallen soldiers. Headquartered in New York City, FIDF is a 501c3 not-for-profit corporation that operates 13 regional offices in the United States and two offices in Latin America. The strength of the IDF, which has been guarding the State of Israel since it declared independence in 1948, derives from the selfless determination and great capabilities of the young men and women who form it. At the tender age of 18, all Israelis are drafted into the IDF. Those who serve commit to uphold the difficult tasks of defending Israel’s borders and guaranteeing the safety of its people. The Israeli government is responsible for training IDF soldiers and providing them with the necessary tools for their service. FIDF is committed to providing these soldiers with love, support, and care in an effort to ease the burden they carry on behalf of the Jewish community worldwide. 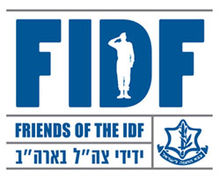