Dr. Lev Sviridov joined the Macaulay Honors College at Hunter College in 2013 as an Acting Director. Following a national search, Dr. Sviridov was appointed Director in 2014. He received a B.S. degree in Chemistry from The City College of New York and a D.Phil. degree in Inorganic Chemistry from the University of Oxford, where he was a Rhodes Scholar. Prior to his service as Acting Director, Dr. Sviridov served as a Senior Research Associate at the CUNY Energy Institute. He is a member of the Board of Directors of the Concord Consortium, Human Rights First, the 21st Century Foundation, and serves as the Secretary of the Varma Cooperative Homes. In his free time, he enjoys going to the opera and spending Sunday afternoons playing softball in the park. 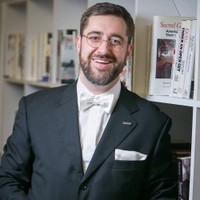