Vice President, Client Industry Executive. Electronic Data Systems Corporation (technology services). Vice Admiral Tracey received a Bachelor of Arts degree in Mathematics from the College of New Rochelle and a Masters Degree in Operations Research from the Naval Postgraduate School. From 1970 to 2004, Vice Admiral Tracey served in a series of increasingly responsible positions with the United States Navy, including Chief of Naval Education and Training from 1996 to 1998; Deputy Assistant Secretary of Defense (Military Manpower and Personnel Policy) from 1998 to 2001; and Director, Navy Staff from 2001 to 2004. Vice Admiral Tracey served as a consultant to the United States Navy from 2004 to 2005 and to the Department of Defense from 2005 to 2006. In 2006, Vice Admiral Tracey served as a Senior Fellow at the Center for Naval Analysis prior to taking her present position of Vice President, Client Industry Executive at Electronic Data Systems Corporation. 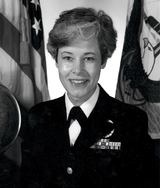